Keeping Our Eyes on Jesus 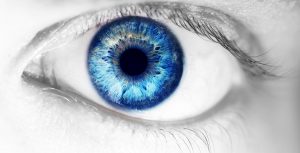 The apostle Peter and the other disciples were crossing the Sea of Galilee one night when they were caught in a sudden storm. Wind and waves threatened to capsize their vessel.

As they struggled against the elements, they saw something that really frightened them. In the distance, illuminated by flashes of lightning, was a person walking on top of the water. The disciples were convinced they were seeing a ghost until they looked more closely and saw it was Jesus walking toward them.

While his traveling companions panicked, Peter asked Jesus if he could join him on the water. Keeping his eyes fixed on the Lord, Peter stepped out of the boat and onto the Sea of Galilee.

The Bible doesn’t say what distracted Peter. Perhaps it was an especially large wave or a crash of thunder that made him take his eyes off Jesus—his hope for staying afloat—to look around at the precarious position he found himself in. Immediately Peter started to sink.

“Lord, save me!” he cried. Jesus reached out, grabbed Peter’s arm and helped him back into the boat.

Peter’s experience offers a helpful analogy of the hope found in Scripture. As long as he kept his eyes on Jesus, he was able to stay above the fray, even though he was in the midst of it. When he took his eyes off Jesus, he started to get overwhelmed. Yet he didn’t sink so far that Jesus couldn’t reach him.

God’s Word is like that for believers. We live in a stormy world. Waves of financial despair, emotional upheaval, relationship issues and personal failures threaten to capsize us and pull us under.

Yet if we keep our eyes fixed on God’s Word, we can stay above the fray. If we allow its words to resonate above the cacophony of doubt, worry, conflict and uncertainty that nag at us every day, we can enjoy an extraordinary walk with Jesus.