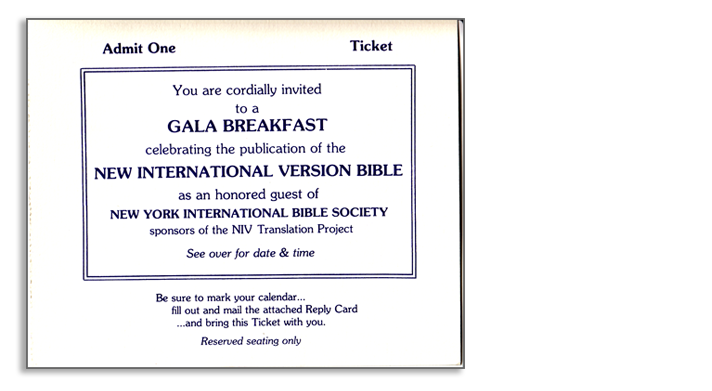 Pastors and other Christian leaders were invited to meet members of the CBT and ask questions at breakfasts throughout the Unites States in October and November 1978.

By the time the full New International Version of the Bible was released to the public on October 27, 1978, more than one million copies had already been preordered.

Those who had purchased the 1973 version of the NIV New Testament had eagerly awaited the publication of the full Bible, and the word was spreading in Christian circles about this new, contemporary English-language Bible. Retailers stocked their shelves, and everyone involved in producing the translation rejoiced, thankful that 13 years of effort was not in vain.

Amid a flood of positive reviews, it wasn’t long before Zondervan ordered a second printing, and then a third.

To familiarize ministry leaders with the NIV, the New York International Bible Society (now Biblica) hosted breakfasts across the United States to celebrate the translation’s release.

“Whatever role the NIV plays in your future church life depends on your assessment,” NYIBS president Youngve Kindberg wrote in the invitation to pastors, school officials, bookstore managers, chaplains, editors of Christian publications, and denominational and organizational leaders.

At these events, at least one Committee on Bible Translation (CBT) member was present to explain the translation philosophy and process, and to answer questions from these key influencers in the evangelical community. As a parting gift, attendees received copies of hardcover pew Bibles.

To share the translation with future church leaders, Zondervan later gave out copies of the NIV to seminarians who often didn’t have the money to purchase new Bibles. Years later, those seminarians who had become pastors would thank Zondervan’s president, Bruce Ryskamp, for the gift:
“You don’t know this, but you gave me this NIV Bible, and I’m still using that NIV Bible in my preaching.”

As the translation entered the market, it also gained popularity organically through the movement toward a more generic form of evangelicalism. Prior to the 1970s, churches were usually associated with a particular denomination—Baptist, Methodist, Lutheran, Presbyterian, etc. When the NIV was published, more churches were branding themselves as nondenominational or just evangelical. A faithful version of the Bible that wasn’t tied to a particular church, person or denomination was just what these churches needed.

“The NIV caught on and became very popular in the broader evangelical movement,” said Doug Moo, chairman of the CBT.

“The version appears to be just what many of us longed for, but hardly dared hope for.”
—Pastor, Kenmore, Australia 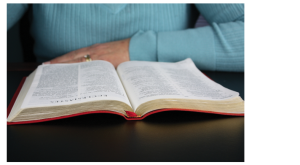 Today, the NIV is the most widely read contemporary English Bible translation.

A Translation for the Entire English-Speaking World

When the NIV was first commissioned, the goal had been to create a translation for the entire English-speaking world—one that was not too American or too anglicized. Translators from the United States, Canada, England, Northern Ireland, Australia and New Zealand participated in the project to ensure that it would appeal to a broad English-speaking audience.

When the initial translation was completed, the text went to a team of English specialists who suggested spelling and vocabulary adjustments that would make the text more readable for those in the British Commonwealth, such as using quarter instead of fourth, and cornfield instead of grainfield.

In February 1979, Hodder and Stoughton published the Anglicized edition of the NIV with an initial run of 300,000. When the Bible came off the presses in Brighton, Edward England, head of the publisher’s religious department, immediately checked the Ten Commandments. He wanted no repeat of the so-called “Wicked Bible” of 1631, which accidently omitted the word “not” from the seventh commandment.

Thankfully, every word was in place.

“What bowls you over as you read the New International Version is quite how much of the old Bible you misunderstood,” Peter Grosvenor wrote in the Daily Express after its release.

“The English is good and clear. The translation is accurate, dignified and readable,” the Reverend Donald Allister said.

The translation also gained a following in India. It was the version CBT member Paul Swarup used as a teenager, and he still remembers being surprised by the translation at first.

“It was in the 1980s,” Swarup said. “We moved from the King James Version to the Good News, and then all of a sudden, we have this great translation which is easy to read and easy to understand . . . very accurate and enjoyable reading.”

The pace of adoption around the world was steady but not without struggles. People become attached to their Bibles, regardless of which translation they have. They have memorized its words and endlessly flipped through worn pages. For some Christians, deviating from their trusted King James Version was tantamount to heresy.

Randy Frazee, co-pastor of Oak Hills Church in San Antonio, Texas, was first exposed to the NIV at a Bible college that maintained that the King James Version was the only translation Christians should read. When a pastor’s son secretly showed Frazee the NIV one evening, he thought, “I’m in big trouble.”

But Frazee couldn’t get the translation out of his mind, and eventually he decided to investigate the merits of different translations. He found that he respected the heart and skill of the NIV translation team.

“They were really serious about the original languages and manuscripts yet really trying to keep the contemporary person in mind,” Frazee said. He began to use the NIV in seminary, and has studied it and preached from it ever since.

The NIV was embraced by many in established evangelical denominations as well as the new nondenominational movement. As the translation’s reputation for clarity and accuracy spread, churches adopted it for use in Bible studies, preaching, memorization programs and Sunday school classes.

In 1984, the publishing house for the Nazarene denomination, which already used the NIV for its youth curriculum, began using the NIV for its adult Sunday school curriculum, as well. “The King James Version is not as meaningful to this modern generation as it was to previous generations. We felt the New International Version would speak more clearly to our people.” 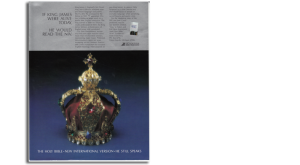 “If King James were alive today, he would read the NIV.” NIV advertisements in the 1980s reminded people that of the purpose of the translation was to be understood by modern readers.

Churches quickly came to appreciate the NIV’s accessibility to a wide variety of readers, as well as its use for study. In 1976 and 1977, before the full Bible was released, Grace Theological Seminary compared students’ comprehension of the NIV against their comprehension of the King James Version and the New American Standard Version. The participants were children who had grown up in the church and attended Christian schools in Delaware, Maryland, Ohio and Virginia.

Older readers had similar experiences over the years. One day after church, Paul DeVries, pastor of Brookside Church in Grand Rapids, Michigan, was approached by an elderly man in his congregation. The man, who had come back to his faith late in life, had a question. He had an old King James Bible and a Living Bible: which one should he use? DeVries launched into an explanation about the difference between a translation and a paraphrase. Between the two Bibles the man had, one was hard to understand and the other was not as accurate.

DeVries handed him an NIV. “Read it and see if it’s understandable for you,” he said.

Not long afterward, the man returned and said, “I like this Bible.”

Today, DeVries’ church still recommends the NIV and its balanced translation philosophy to new believers and new members. “I don’t know anything that compares to it when it comes to good, plain readability,” DeVries said.

“This Bible communicates.”
—The Alliance Witness The NIrV helps make the Bible more comprehensible to those just learning to read English.

By late 1986, the NIV had become the bestselling English-language Bible, and it has remained so ever since. The goal of the NIV had been to do for modern people what the King James Version of the Bible did in centuries past: faithfully put God’s Word in the language of the people. And it had done just that.

“If you’re too literal,” translator Ken Barker said, “you create a new English, one that is not how people speak and read and talk today.”

If the translation had been too focused on style, however, it could not have been as faithful to the original text. The NIV’s success in achieving this balance made it an attractive translation to a broad spectrum of evangelical Christians worldwide. “The NIV is an English I know and speak and own, and yet, it’s God’s Word,” CBT member Jeannine Brown said.

Churches still reap the benefits of this translation approach. Eden Baptist Church in Cambridge, United Kingdom, has a diverse congregation and has used the NIV translation for years as its pew Bible. When Pastor Julian Hardyman joined the church, he continued to use the NIV for preaching and teaching.

“We have quite an academic community, but the church is also full of children and internationals for whom English is their second language,” Hardyman said. “The NIV is just spot on with its register for reaching these difference groups.”

Though the language of the NIV is clear for many age groups and reading levels, the International Bible Society embarked on an effort in the early 1990s to help the NIV’s youngest readers and those who speak English as second language more easily understand it. Some of the translation’s longer words and sentences were still difficult for these constituencies to read.

Translators and several CBT members worked with English-language experts to create a version of the NIV written at a third-grade reading level. Matthew 13:14 went from “you will be ever seeing but never perceiving” to “You may see. But you will not learn anything.” When this new version was published in 1996, they called it the New International Reader’s Version, or NIrV.

“We will not freeze our text as the King James Version did, thus making our work obsolete in time to come.”
—Ed Palmer, Executive Secretary, CBT, 1978 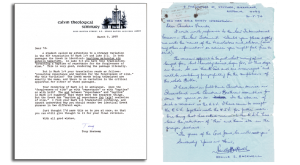 Pastors and ministry leaders from around the English-speaking world sent letters to the Bible society and the Committee on Bible Translation, offering praise and feedback on the NIV translation.

From its earliest days, the NIV was meant to be a living translation. “Periodic review and revision” was written into the constitution of the CBT, and the 1968 agreement between the CBT and the New York Bible Society included a provision to finance future revisions of the text. The translators knew that new scholarship would inevitably emerge, providing fresh understanding of the original languages and texts.

Additionally, inconsistencies might have been found in the translation, and discoveries in archeology would provide new insights—and the English language would certainly continue to change long after this “modern” version was published.

“We will not freeze our text as the King James Version did,” Ed Palmer said, executive director of the CBT. “Neither will we make frivolous, ho-hum changes.”

In May 1979, the CBT met to consider business issues and decide how to handle proposals for revision that continued to come in, since members had welcomed constructive feedback throughout the translation process.

After the New Testament was published in 1973, a pastor in Chelmsford, England, had recommended ending John 1:36 with an exclamation point instead of a question mark, and a professor at Calvin Theological Seminary sent in a note after a student alerted him that a Greek word was translated two different ways, in Mark 1:4 and Luke 3:3.

Now, suggestions were coming in for both the Old and the New Testaments. The CBT decided to wait until the tenth anniversary of the publication of the NIV New Testament to review all of the new proposals and issue a new edition of the full Bible. In 1983, members came together at the Spanish Bible Institute in Barcelona, Spain, for the first extensive revision of the text.

They would need to work through many issues, but they had only one end goal in mind: keeping the NIV accurate, beautiful and clear to modern English-speakers.