When Daniel was a young man, he was exiled over 900 miles from his home in Jerusalem to Babylon, the capital city of the Babylonian Empire. The Babylonians worshiped a multitude of gods and even considered their king to be a god. Though living in this place of spiritual darkness, Daniel and his friends remained true to their faith. Even though they were exiled from their homeland, they were not cut off from God’s presence. In fact, in this strange land they discovered a deeper sense of God’s closeness.

When he arrived in Babylon, Daniel refused to eat the rich foods of the king’s table and requested a simple diet of vegetables and water (see Daniel 1:12). While this was not a complete fast, Daniel restricted his food intake in order to maintain his spiritual focus. Later, he even fasted while interceding for the restoration of Jerusalem (see Daniel 9:3). In Daniel 10:3 we read again of a partial fast from rich food, meat, wine and the use of fragrant oils over a three-week period of mourning following a vision of coming war and hardship.

Daniel prayed three times a day (see Daniel 6:10), presumably upon waking in the morning, at midday and before retiring at night. He also prayed when called upon to interpret dreams for the king (see Daniel 2:18). Daniel’s wisdom and education were no substitute for his vital fellowship with God in prayer.

We know little about Daniel’s specific worship practices. The Israelites in exile had to adjust to the lack of a temple or place of meeting and the prohibition of sacrifices in Babylon. Nevertheless, we see evidences of Daniel’s worship and thanksgiving when God revealed to him the answers to dreams (see Daniel 2:19 – 23).

The study of the Scriptures also undergirded Daniel’s life. His insistence on a strict dietary code shows that he was familiar with the laws of purity, such as those in Leviticus. Daniel 9:2 records that Daniel studied the writings of the prophets, especially Jeremiah, his contemporary, who had remained in Jerusalem.

Repentance and confession also characterized Daniel’s life, as evidenced by his prayer in chapter 9. In this prayer he identified not only with his own sin but also with the sin of his people.

Daniel also practiced the spiritual discipline of service, regarding his work as the king’s political adviser as a ministry from the Lord. Daniel never compromised his beliefs, and his faith was evidenced in his work on countless occasions. Daniel shows us that faithful believers can thrive in the midst of difficult work environments. Their lives can shine as testimonies to their faith in God.

The root concept of holiness is that of being “set apart” from the world. Daniel’s spiritual disciplines set him apart as God’s person from the very beginning of his time in Babylon. The Babylonians constantly tried to assimilate God’s people into their culture, even changing their Hebrew names to Babylonian ones. Despite these efforts, Daniel’s spiritual disciplines helped him retain his true identity as a follower of the one true God and kept him from compromising his faith.

Daniel’s spiritual exercises also helped him look to God for strength when all other supports were stripped away from him. In the king’s court, Daniel lacked a favorable consensus about right and wrong. Instead, Daniel drew his strength and support directly from God. We, too, can use these spiritual disciplines to help us draw strength from God whenever we face opposition. 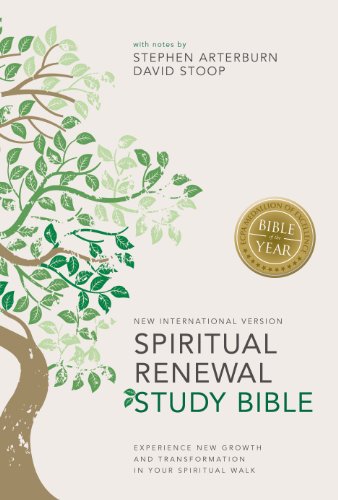 Using a time-tested process honed over decades of counseling and teaching, Stephen Arterburn employs 7 core principles of spiritual renewal and refreshment, connecting you more closely with God’s Spirit through his Word and helping you to develop the deep, satisfying change you desire in your spiritual life. Learn More