What the Bible Tells Us About Freedom Why do millions of Indians refuse to accept the commonly used honorific Mahatma (great soul) when referring to Gandhi? While Gandhi is respected worldwide for his nonviolent movement for India’s freedom from British rule, some two hundred million Dalits, known formerly as “untouchables,” contend that he did little to denounce the caste system as evil and to fight for their freedom from centuries-old exploitation by their fellow Indians. Even though the Indian constitution forbids “untouchability,” Dalits (meaning “broken”) have faced the evils of the caste system for centuries.

Dalits would rather honor someone like Jyotirao Phule (1827–1890) or B. R. Ambedkar (1891–1956). These men dared to challenge the pervasive caste system and worked for justice and equal rights for those suffering under India’s ancient apartheid. They would not separate political oppression from religious and cultural oppression.

Oppression is oppression, and justice is justice, no matter how it is perpetrated and by whom. If Dalits remain enslaved by religious and cultural forces, they cannot experience genuine freedom. And the struggle continues. Even today a huge section of those who face grinding poverty, sex trafficking, child and bonded labor come from oppressed Dalit communities. Gandhi failed to denounce the injustice of caste; hence, he could not be an apostle of good news for the Dalits.

Some nineteen hundred years earlier, the apostle Paul took a stand for freedom—complete freedom. He stood up to his fellow Jewish Christians, even his fellow apostle Peter, and became the beloved apostle for billions of Gentiles today.

Paul insisted that Christians are not only free from the debt of sin, but also free from the obligation to follow Jewish regulations. Christ’s freedom penetrates to the level of social, religious and cultural liberation. It does not operate strictly on a spiritual plane. Instead, freedom must dismantle the religious apartheid that keeps Gentiles and Jews (and anyone else) separate and unequal. In Christ and enabled by the Spirit, all followers of Jesus can walk in a new freedom and fulfill God’s expectations.

The book of Galatians, written around AD 55, is Paul’s charter of freedom. He writes passionately and emotionally because he knows that freedom is at stake. He vehemently defends “the truth of the gospel” (Galatians 2:5,14), for the sake of the Gentile believers in Galatia and elsewhere. In the face of those who want Gentile Christians to adopt traditional Jewish religious practices, Paul insists that only faith in Jesus Christ is necessary for salvation.

Paul takes most of the first section of the book of Galatians—chapters 1 and 2—to buttress his claim that this is the genuine God-given message. He received his commission to preach the gospel of Christ directly from God, without any human mediation.

The death of Jesus brought an end to the necessity of Jewish religious observances. And the proof of this is the gift of the Holy Spirit being given to the Gentile believers by faithmdash;without their being circumcised or following Jewish regulations.

For Paul, Christ’s redeeming death has now inaugurated a new creation (Galatians 6:15). All people, Gentiles and Jews, irrespective of gender or social status, have equal standing in Christ (Galatians 3:28). This charter of freedom in Christ is also a summons to work for justice, patiently and without giving up, for the good of all (Galatians 6:9–10).

Edited from an article by Jacob Cherian in the The Holy Bible God’s Justice ebook. Jacob Cherian is professor of New Testament at Southern Asia Bible College, Bangalore, India. He is a founding member of Bombay Teen Challenge which is engaged in the rescue and care of those caught up in human trafficking, addiction and poverty. 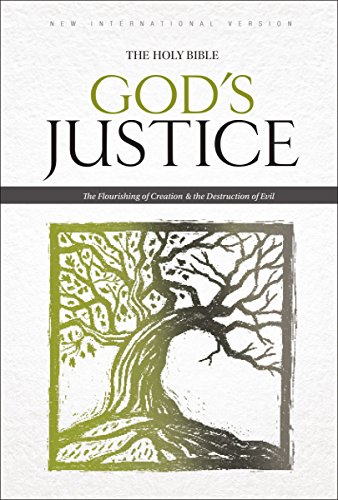 God’s justice, his “setting things right,” is a foundational principle of the Bible. The Holy Bible God’s Justice ebook traces God’s plan for justice with articles that draw out issues of justice from Genesis to Revelation. Learn More