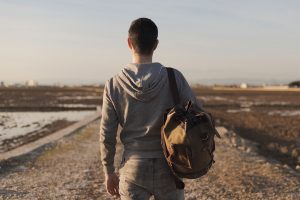 Most married people cannot tell you the exact day they fell in love. They all, however, know whether or not they are married.

In the same way, our Christian spiritual journey is a process. But it also has a destination — a line we must cross. People cannot necessarily tell you the day they began to believe in God or the moment they came to realize Jesus is truly the most extraordinary person in history. Nor do they need to know the timing of such conclusions any more than people need to be able to identify a specific instant when they fell in love to know they are in love.

But becoming a Christian is like having a wedding day. It’s a very good thing to know that it happened, and when. Otherwise, as in the context of romance, you’re just dating; there’s no commitment on which to build. Even living together isn’t the answer, because while such an arrangement is a blending of sorts, it lacks the once and for all “I do” that makes two people bound together for life.

Some people see their belief in God as progress from their former disbelief. Such movement is progress — although as one Biblical writer wryly pointed out, belief in God puts you at the same spiritual level as demons, who also believe in God (see James 2:19)! The issue for us as spiritual pilgrims isn’t mere belief, but love; it isn’t cognitive assent to facts, it’s commitment to a person. Even Jesus’ enemies acknowledged his existence and that he was extraordinary. What they would not do is follow him.

If you are a spiritual explorer, you are like a person “dating” — only in this case, it’s God you’re getting to know. You might be growing in your knowledge of him, you may notice greater appreciation for his care, you may even be feeling affection and love toward him. But the Bible invites you to make a commitment — first, to lay aside all your attempts to secure standing with God by your own efforts (well-intended though they may be), and then to accept his gracious offer of forgiveness.

To express the intimate relationship between God and his people, his followers are referred to as his bride (see Revelation 19:7). Notice the Bible doesn’t say “the friends of Jesus” or “the people who date Jesus from time to time” or “those who want a live-in arrangement with God that requires no commitment.” No. He longs for us to go all the way to becoming his dedicated spouse, sealed to him forever as his bride.

Consider this invitation from Jesus: “Here I am! I stand at the door and knock. If anyone hears my voice and opens the door, I will come in and eat with that person, and they with me” (Revelation 3:20) There is no literal door at which Jesus stands, so what door is he talking about? You probably feel it even now: It is the door to your life, your heart and the center of your ultimate allegiance. Like a person on bended knee before their lover, Jesus wants to make it official and permanent with you. “Be mine!” he says, hands extended.

So how do you cross the line to become a true follower of Jesus and not remain a suitor? It’s really quite simple — as simple as saying “I do” at the altar or accepting as a gift a certificate of adoption. What did Jesus say in that above passage we are to do as he stands knocking? Open the door. And then what will he do? He will come in and throw a dinner party!

Consider what the following passage promises: “To all who did receive [Jesus], to those who believed in his name, he gave the right be become children of God —children born not of natural descent, nor of human decision or a husband’s will, but born of God” (John 1:12 – 13). According to that text, what are we supposed to do? We are to receive him and believe in his name (that is, believe in the character and saving work of Jesus). And what does God do? He pledges to make us his children by right — to take us beyond the mere physical creatures we all are by nature and become spiritual children through adoption.

“For God so loved the world that he gave his one and only Son, that whoever believes in him shall not perish but have eternal life. For God did not send his Son into the world to condemn the world, but to save the world through him. Whoever believes in him is not condemned, but whoever does not believe stands condemned already because they have not believed in the name of God’s one and only Son” (John 3:16 – 18). The invitation is to believe in Jesus — that is, to trust in, rely on and cling to him. God already loves us, which he demonstrated by sending his one and only Son, Jesus, into the world. Now in response to our believing, he will undo our former destiny, which was to perish, and instead give us eternal life.

The choice is yours whether or not to cross the line. If you’re ready, simply talk to God. You can do this out loud or silently, or write out your thoughts in the form of a letter. Consider the following points:

• Admit your need for Jesus.
• Trust that he loves you, forgives you and wants you to be his.
• Declare your acceptance of him and his rightful place as leader of your life (and be sure to actually tell someone else what you’ve done).
• Immerse yourself in his teachings; then do what he says — not to gain his approval but because living out his words leads to the best life possible.
• Connect with others who also want to follow Jesus for mutual encouragement and learning.

If you’re not ready to take this step, that’s okay too. Continue your search. Read the Bible and ask Christians you know the questions that are holding you back. Find some time to be still and listen for Jesus’ knock at the door. When it comes — and we sincerely believe it will — determine now that you won’t delay in answering.

Cross the line. Become his follower. Then keep following him in every circumstance. It will be the best decision you ever make.