Long mulled over the incident at the Multnomah Hotel for months. Each time he thought about the versions of the Bible available to him, he grew more frustrated. Long grew up with the KJV Bible’s beautiful words and phrases, memorized them and came to cherish them. He had been frustrated with its older language when he evangelized or discussed Scripture with young children, but he had never felt his translation’s age as acutely as on that evening in Portland.

One day after church, his disappointment over the lack of an appropriate translation came out in a flood toward his pastor, Peter DeJong.

“If you feel so strongly about it, why don’t you do something about it?” DeJong replied.

DeJong agreed with Long. It was past time for a new translation of the Bible in contemporary English that was faithful to the original languages of the Bible, and he was prepared to help find a solution. But it would take 10 more years before the evangelical community would endorse efforts to produce the new translation.

The two men knew they needed to first gain the support of their local church leadership. Long and DeJong were members of the Christian Reformed Church tradition in Seattle. Process dictated the flow of ideas and proposals. With the support of elders and deacons, the proposal was taken forward to the denomination’s regional convention. But the proposal stalled—and failed.

No one was going to burn the representatives from Seattle at the stake for wanting a contemporary English translation, but the rest of the region did not recognize this as an urgent need. 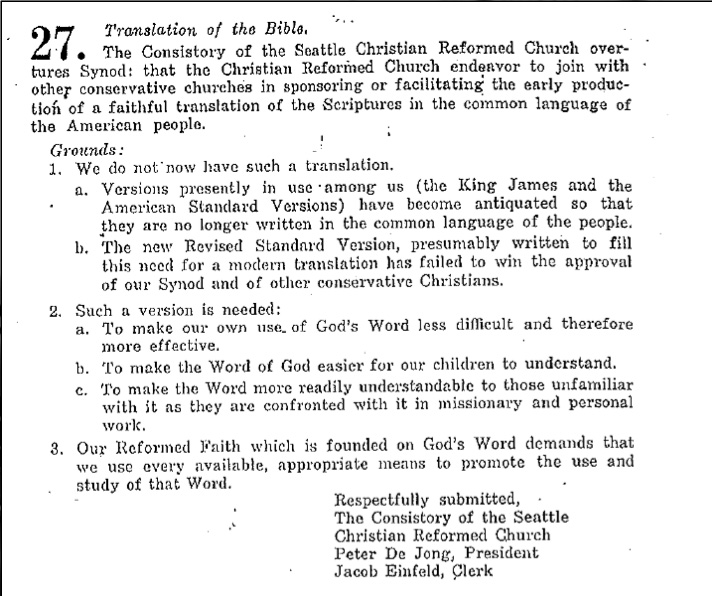 The Seattle church’s overture failed to gain support at the regional level.

The church’s leadership was not about to let go of what it felt was an urgent necessity. It decided to bypass the regional group’s approval and go directly to the entire CRC denomination. It argued that the Bible’s message would be more effective if it was easier to understand.

“Our Reformed Faith, which is founded on God’s Word, demands that we use every available, appropriate means to promote the use and study of that Word,” the Seattle contingency wrote in its Overture to the Synod in 1956.

This time, the proposal struck a chord. The wider denomination was not happy with the recently released RSV Bible and was ready to consider alternatives. A committee of four professors from Calvin Seminary was commissioned to study the issue and investigate what it would take to issue a new translation.

Long, who hadn’t been able to attend the denominational meeting, told the CRC committee it would take at least a few million dollars to complete the project, but he wasn’t worried about finding the money. After all, Long would argue, what does Christianity need more: $100,000 pipe organs, or a Bible in the language of the common people?

The four scholars thought Christianity likely needed a new Bible but wanted to hear from other members of the evangelical community before pursing such an expensive idea. Extensive correspondence began between the committee and Bible scholars, Christian publishers, churches, Bible societies and missions organizations.

The National Association of Evangelicals, a group representing dozens of denominations and hundreds of other Christian organizations, received one of the letters asking about a new English version of the Bible and thought it worthwhile enough to form its own committee to investigate the issue. But neither the CRC nor the NEA group was in a rush. An undertaking of such gravity would require an extensive foundation of support, resources and talent.

The two groups finally came together in April 1961, recognizing that they would need to work closely to make meaningful progress. The NAE could summon the broader evangelical support necessary for such an endeavor, and the CRC was far ahead of the NAE in conducting the studies and research that were needed in order to begin a new translation.

In late 1962, their next step became clear. They would work to host a Bible conference made up of leading evangelical scholars, potential sponsors and endorsers.