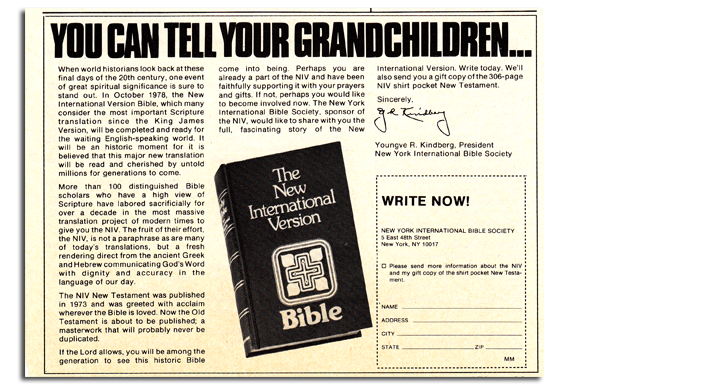 It was a good thing the New York Bible Society had no idea what the final price tag would be for a contemporary English translation of the Bible. If it had, the society might never have agreed to fund the project, which ultimately cost more than $2 million.

The Committee on Bible Translation (CBT) and the society had done studies to determine what it would take to complete the work, estimating costs at $850,000. Such a cost would stretch the modest-sized Bible organization. But the society believed in the translation and was determined to help make it possible.

Everyone knew that translating the Bible was an enormous task. Nevertheless, it became apparent early on that doing it well would take longer than planned. By the end of 1975, the translation costs had topped $1.26 million, and the Old Testament was still several years away from completion.

The society could not keep up with costs. Its already small staff had been reduced by half. The core endowment from its 1909 centennial campaign had dwindled, and double-digit inflation took its toll on what was left. Board members had even taken out second mortgages on their homes to help with costs.

The CBT had tried to help with fundraising along the way. A few years earlier, the executive secretary of the CBT, Ed Palmer, started the 450 Club. He hoped to find 450 people who would agree to donate $250 a year for the next four years to the effort, but only 30 people responded.

The New York Bible Society told the CBT in November 1975 that the next step was potential cancellation of the Old Testament translation. The committee put measures in place to work more quickly, but the new translation still urgently needed funding.

In early 1976, the society’s president, Youngve Kindberg, decided to approach Zondervan. The CBT had asked Zondervan Publishing for funding before the New York Bible Society stepped in. At that time, the publisher had declined, unsure of the need for a new Bible. By 1971, however, Zondervan trusted that this new translation would benefit all believers and agreed to become the sole American licensee. It published the New Testament: The New International Version in 1973.

Kindberg and the Bible society asked the publisher for additional advances on the Bible’s royalties in order to complete the translation of the full Bible.

“By this time,” founder Pat Zondervan said, “we were so enthusiastic about the potential of blessing that this new translation would bring that we wanted to do all that we could to assist in the underwriting of the expense.” Zondervan offered to advance up to $250,000 in royalties through 1978.

The work could continue.

To raise additional funds, the New York Bible Society sold its beloved New York City building in the midst of a buyer’s market. The neo-Gothic structure at 5 East 48th St. had been honored by the New York Chapter of the American Institute of Architects when it was completed in 1921. The society moved from New York to East Brunswick, New Jersey. It had sacrificed almost everything.

Despite all the financial troubles, a new day was dawning. Once the NIV was released in 1978 and royalties started flowing in, the society began to expand its ministries. It grew from a regional Bible ministry into a vibrant global organization, eventually moving its headquarters to Colorado Springs, Colorado.

Known today as Biblica, the ministry works in 55 countries and continues to fund the translation and publication of Bibles in the world’s leading 100 languages so that billions of people can experience the life-transforming power of the Scriptures in their heart language.