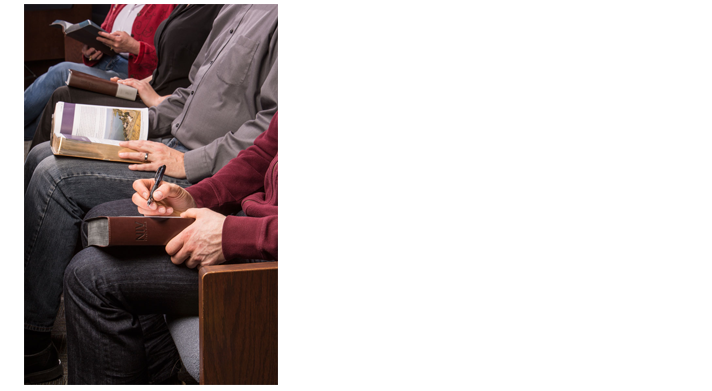 Pastors often choose the NIV for Scripture readings in church because the version is well understood by the people in the pews.

At Oak Hills, that language is the New International Version of the Bible. Frazee and co-pastor Max Lucado use the NIV as the main text when preaching and recommend it to members as a Bible for personal devotions. The church’s Scripture memory programs also use the NIV, helping congregants become familiar with a shared version of Scripture.

Though Frazee recognizes the value of other translations, he chose the NIV because of the way it balances faithfulness to the original texts with the needs of the modern reader.

Paul DeVries, the pastor of Brookside Christian Reformed Church in Grand Rapids, Michigan, agrees. He has preached from the NIV since seminary because of the way it communicates in English without becoming a loose paraphrase of God’s Word.

“The scholars who put together the NIV were really attempting to use language the everyday person uses and speaks,” DeVries said.

“It was accurate and allowed us to get a hold of the meaning of the Bible clearly,” said Julian Hardyman, senior pastor of Eden Baptist Church in Cambridge, England. The first church he served, in Nottingham, England, used the NIV, and he has continued to use the translation at Eden Baptist because of its ability to connect with a congregation that includes young children, Cambridge academics, and those for whom English is a second language.

However, no translation is perfect. DeVries, Hardyman, Frazee and other pastors study other versions as well as the NIV each week to better understand Scripture.

“Once I started learning Greek or Hebrew, I sometimes wondered why they did this or that, but as I looked more closely, it became obvious,” DeVries said. “You can always understand the judgments that were made, even if you disagree.”

One choice by translators in 2 Timothy 3:16 brought fresh understanding of the passage for Frazee. Whereas other versions begin the verse with “All Scripture is inspired by God,” the NIV reads “All Scripture is God-breathed.”

The choice to go with a literal but rarely used phrase in this instance has helped readers such as Frazee to see how the verse fits with other parts of Scripture. He made the connection with Hebrews 4:12, which describes Scriptures as “living and active,” and Genesis 2, where God breathes life into Adam. “It’s a Scripture that opened up the power of Scripture,” Frazee said.

Though they will occasionally take issue with a word or phrase, Frazee, DeVries and Hardyman have no quarrel with the translation’s philosophy of balancing accuracy with readability.

“It’s a labor of love and a great gift to the church,” Hardyman said. “We’re in a wonderful position to have so many great translations. But from my perspective, the NIV is probably the best.”

At DeVries’ church, those who make faith commitments receive a Bible of their choosing as a gift. Most people select the NIV. They may not know the history of the translation or even why there are so many translations, but through their experience of hearing and reading the Scriptures at church, they know the NIV is a Bible they can understand.