The Biblical Stairway to Heaven 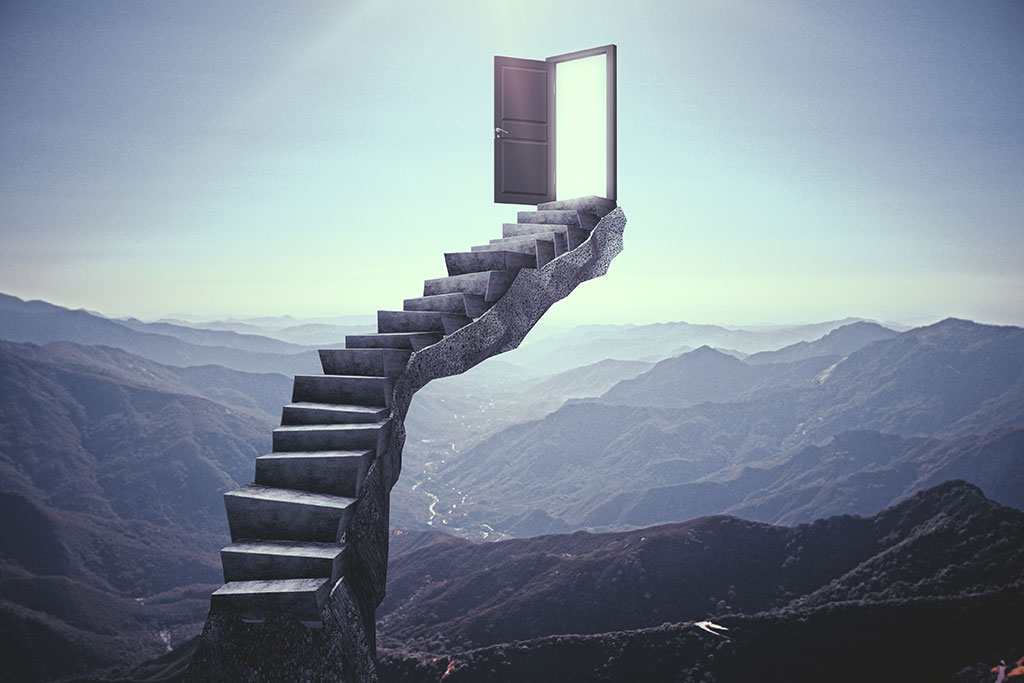 Jacob left Beersheba and set out for Harran. When he reached a certain place, he stopped for the night because the sun had set. Taking one of the stones there, he put it under his head and lay down to sleep. He had a dream in which he saw a stairway resting on the earth, with its top reaching to heaven, and the angels of God were ascending and descending on it. There above it stood the Lord, and he said: “I am the Lord, the God of your father Abraham and the God of Isaac. I will give you and your descendants the land on which you are lying. Genesis 28:10-13

In Jacob’s dream, the messengers of God appeared passing between the realms in a portal to heaven. Such portals are envisioned as stairways – as opposed to ladders – in ancient mythology. These portals were considered sacred space. The link between heaven and earth provided passage for the deity from the gate of his heavenly temple-palace to the sacred space marked out on earth for his presence and worship. Such places were marked with temples once their location had been revealed to people living in the area.

Jacob had slept in what is in effect the antechamber of a temple and had seen the stairway leading to the gate of heaven (the inner chamber) with the messengers coming and going from the Lord’s presence; therefore, he set up a standing stone either to mark the “Most Holy Place” at the top of the stairway or the place where Yahweh stood “above” or “beside” the stairway (see verse 13).

There is a continuum in space between the heavenly dwelling and the earthly one in the sense that they are like the upstairs and downstairs of the same building. The earthly temple can be thought of as actually existing in the heavenly realm. The temple is a place in both worlds, just as the grave is a place both on earth and in the netherworld.

Some temples featured a stairway from the antechamber up to the central cella – the temple’s inner sanctum – where the deity dwelt, indicating perhaps that the deity’s heavenly dwelling was there in the middle of the earthly temple. If this is so, the “gate of heaven” could be considered the entryway to the temple’s inner sanctum, whether at the bottom of the stairway or at the top.

These portals are also architecturally represented in the ziggurats of ancient Mesopotamia which were built to provide the stairway for the gods to come down and be worshiped in their temples.

Though they may resemble pyramids in outward appearance, ziggurats are nothing like them in function. Ziggurats have no inside. The structure was framed in mud brick, and then the core was packed with fill dirt. The facade was then completed with kiln-fired brick. Ziggurats were dedicated to particular deities. Any given deity may have several ziggurats dedicated to him or her in different cities and a given city may have several ziggurats, with the main one associated with the patron deity of the city. Archaeologists have discovered nearly 30 ziggurats in the Mesopotamian region, and texts mention several others. The main architectural feature is the stairway or ramp that leads to the top. There was a small room at the top where a bed was made and a table set for the deity. Ziggurats range in size from 60 feet (18 meters) per side to almost 200 feet (60 meters) per side.

The ziggurat did not play a role in any of the rituals known to us from Mesopotamia. It was sacred space and was strictly off-limits to earthly use. Though the structure at the top was designed to accommodate the god, it was not a temple where people would go to worship. In fact, the ziggurat was typically accompanied by an adjoining temple near its base, where the worship took place.

The structure was built to support the stairway and the stairway was a visual representation of what was believed to be used by the gods to travel from one realm to another. It was solely for the convenience of the gods and was maintained in order to provide the deity with amenities and to make possible his descent into his temple.

Jacob did not see a ziggurat in his dream, but rather the stairway portal between heaven and earth that ziggurats were designed to provide. The angels Jacob saw were not marching in procession down and up the stairway as often pictured in art. Rather he saw messengers – angels – going off on missions and returning from delivering their messages.

This article is edited from study features in the NIV Cultural Backgrounds Study Bible.

The NIV Cultural Backgrounds Study Bible brings the ancient world of Scripture to life for modern readers through hundreds of articles, color photos, charts, maps, and more on the customs, culture and literature of biblical times. Learn More