When things are going well, it’s easy for us to think that we’re in control. We’re healthy. We have money in the bank. We go to a good job with prospects for growth. We have a happy spouse and children.

And then a microscopic virus hits and brings the entire world to its knees.

I am sure there are many questions on the minds of people around the world due to the coronavirus. Isn’t it amazing that something so small can disrupt the world? Entire companies shutting down. NCAA finals cancelled. NBA and NHL on hold. Italy quarantined. And we think we are in control.

I never cease to be amazed at how people who live in relative isolation from God can blame God when something bad happens, as if he were a celestial nanny who helps when we call on him and stays in the broom closet when we don’t. This, of course, is not the God of the Bible, who has committed himself to send the rain on the just and the unjust (Matthew 5:45), and who has appointed government to secure us some level of societal order and peace (Romans 13), but he has never committed to more than that.

Being his child, however, is a totally different situation. When we removed all trust in ourselves, and placed our trust for all things in Jesus, we were not only forgiven, justified, sanctified, and redeemed; we were also adopted into his family. For those “who believed in his name, he gave the right to become children of God—children born not of natural descent, nor of human decision or a husband’s will, but born of God” (John 1:12–13).

The benefits of being his child instills in us confidence that no matter what happens we know he is our firm anchor in the stormy seas. He is so much in charge that he promises to work in all situations to achieve his good in his children (Romans 8:28–29). I recently spoke on this at Cedarville University and you may find it helpful.

When I hear someone ridiculing God and his children, when I see people who think they are in control—the master of their own fate and the captain of their own soul—I often think of Psalm 2 and its message of human frailty and divine power.

Speaking to the nations about the coming Messiah, King Jesus, the Psalmist writes:

Why do the nations conspire
and the peoples plot in vain?
The kings of the earth rise up
and the rulers band together against the LORD and against his anointed…

The One enthroned in heaven laughs;
the Lord scoffs at them.

He warns the people:

Therefore, you kings, be wise;
be warned, you rulers of the earth.
Serve the LORD with fear
and celebrate his rule with trembling.

But to his children he promises:

Blessed are all who take refuge in him [the Messiah].

It is sad to me that it takes major calamities like 9/11 and the coronavirus to remind us that God is our Father (if we are in fact his children), and that he has made wonderful promises to us, not to keep us from all harm but to walk with us through the dangers of this world and to usher us safely into his kingdom. To the victorious—those who remain faithfully his children—he gives the victor’s crown (Revelation 2:10).

All human security is an illusion. The only thing that is certain is that nothing can “separate us from the love of Christ.” His children know for sure, especially in perilous times, that neither “trouble or hardship or persecution or famine or nakedness or danger or sword” can loosen us from God. Rather, “in all these things we are more than conquerors through him who loved us. For I am convinced that neither death nor life, neither angels nor demons, neither the present nor the future, nor any powers, neither height nor depth, nor anything else in all creation, will be able to separate us from the love of God that is in Christ Jesus our Lord” (verses from Romans 8:35–39).

And that is more than enough. 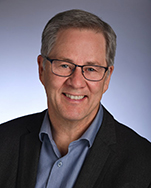 By Dr. Bill Mounce
Bill is the founder and President of BiblicalTraining.org, serves on the Committee for Bible Translation (which is responsible for the NIV translation of the Bible) and has written numerous Greek resources including the best-selling biblical Greek textbook, Basics of Biblical Greek. He speaks and blogs regularly on issues relating to trusting the Bible, the Pastoral Epistles (1 and 2 Timothy, and Titus), Greek and issues of spiritual growth.