The Story of the Bible 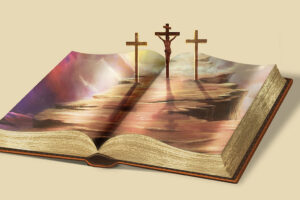 As the most influential book in human history, the Bible consists of 66 books written in 3 languages by 40 authors over 2,000 years. Yet, each book of the Bible fits together to tell one ongoing epic story. Understanding the big picture context, allows us to become a part of its world, learning to participate in God’s story of making all things new.

Creation: In the Beginning (Genesis 1-2)

The story of the Bible starts with God, the author of all reality. From the dark chaos of the uncreated world, he made order and beauty. As his ultimate accomplishment, God created both man and woman in his own image and commissioned them to rule the new world, placing them in a garden where they were in perfect relationship with him and each other.

Chaos and darkness enter and the story takes an important turn. God makes a promise with a man and a woman, Abraham and Sarah, that a new people would come with a chance to make the right choice. But Abraham’s family, the people of Israel, gave in to that same temptation to define good and evil on their own terms. The pattern and consequences of sin are found all throughout creation: violence, deception, death and a relational sever between God and humans.

But not all hope is lost. God promised that the Israelites would be his people and made a covenant with them. As long as they were faithful to that covenant, God would bless them. But generation after generation, the people continually turned from God. The prophets warned that this unfaithfulness would lead to extreme punishment. And, it did. Even then, hope was not lost. God promised to send a new leader to cover for their failures and to transform the people’s hearts and minds so that they could make the right choice. The Old Testament ends with these promises unfulfilled.

The Biblical story continues into the New Testament. A man from the line of Israel’s kings, Jesus of Nazareth, is introduced. He confronts the dark mysterious evil that humanity had given into and resists its power. Then he announces that God arrived to rule the world through him. In this kingdom that Jesus announced, he explains how God defines good and evil. Real power is serving others. People who love the poor and love their enemies are the kinds of people who will rule the world.

Jesus goes on to claim that he is God in human form, come to rescue us from the consequences of our sin. Through his death and resurrection, his sacrificial love broke the power of evil. Humans now have the choice to leave behind the chains of sin and death by following the way of Jesus. In the story, those who choose this way become part of God’s family. They return to the freedom of trusting God’s knowledge of good and evil as they partner with him to care for creation.

The Jesus Movement quickly spread throughout the world, forming new communities of people who followed the way of Jesus. But living out this new way in a world still bound by sin and death proved difficult. The movement’s leaders, called apostles, wrote letters to comfort and challenge these communities to stay faithful even in the midst of difficult times. They are called to hope for the day when Jesus will come and change everything.

The Bible ends by pointing to the future day when Jesus returns to set all things right. Evil will be eradicated, heaven and earth united, and humanity will once again rule the world in the love and power of God.

This is the story of the Bible.

Drawn from The NIV Telos Bible. 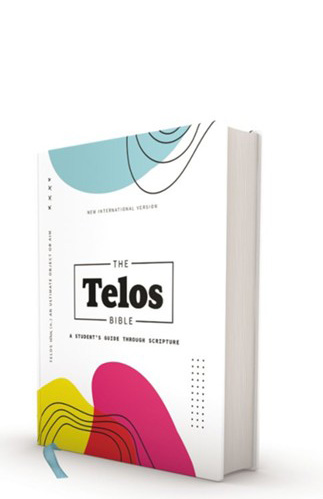 Created to meet the spiritual needs of high school and college students, the NIV Telos Bible is designed to be contextually relevant and to challenge young adults to take a meaningful look at the Bible. It encourages this diverse generation to know and follow Jesus while discovering what the Bible says about the subjects that are most important to them. Acting as a student’s guide through Scripture, this Bible includes tools like book introductions, reading plans, core questions and answers, and journaling prompts to equip young adults to make sense of the Bible. See inside. Learn more.