What Does “Gospel” Mean? 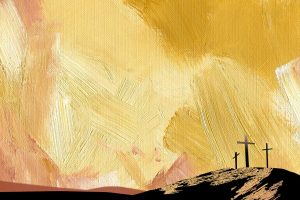 The word gospel reflects the Greek word for “good news” or “momentous news.” The good news is what God has done in Jesus Christ, supremely in Jesus’ life, death, and resurrection. This God did in fulfillment of all that he had promised to do (Luke 24:44) to reconcile lost and guilty human beings to himself, powerfully transforming them by his Spirit in anticipation of their resurrection existence in the new heaven and the new earth.

When Christians used the word “gospel” in the first century AD, it always referred to this message about Jesus; it did not refer to the writings of Matthew, Mark, Luke, or John — books that tell the story about Jesus. At that time, Christians spoke of the gospel according to Matthew, Mark, or the others. Only in the second century and beyond did Christians start talking about these books themselves as Gospels — Matthew’s Gospel (or the Gospel of Matthew), Mark’s Gospel, and so on. In the first century, “gospel” referred to the message, not the book that conveyed it.

(2) If Matthew, Mark, Luke, and John all tell about the one gospel, we gain a clearer idea of what this gospel is by observing what these four books have in common. In all four books, we learn that the one gospel, the one message, focuses on Jesus and emphasizes that his coming and mission fulfill what God promised in the past. These books say something about Jesus’ origin, his teaching and preaching, his miracles, and his interactions with very diverse people — and always the story moves inexorably to Jesus’ death and resurrection. Always there is some explanation of what these stupendous events mean, of what God is doing through Jesus to save his people, to bring in the kingdom, to move history toward its consummation at the end of the age. Without this blend of elements, there is no gospel.

The Message of the Cross

For this reason, the crucifixion and resurrection of Jesus stand at the center of the Christian gospel message. Thus, the gospel Paul preached was this: “that Christ died for our sins according to the Scriptures, that he was buried, that he was raised on the third day according to the Scriptures, and that he appeared to Cephas [Peter], and then to the Twelve” (1 Corinthians 15:3 – 5). Paul recognized, of course, that Jesus’ resurrection was critical to the good news of salvation: “If Christ has not been raised, our preaching is useless and . . . your faith is futile; you are still in your sins” (1 Corinthians 15:14, 17). But since Christ was indeed raised, Paul emphasized the cross as the very center of the gospel message, even equating “the gospel” with “the message of the cross” and “Christ crucified” (1 Corinthians 1:17 – 18, 23). Among the churches he planted, Paul said that he “resolved to know nothing while [he] was with [them] except Jesus Christ and him crucified” (1 Corinthians 2:2).

By dying in his people’s place and paying the penalty for their sin, Jesus became a “sacrifice of atonement” for them (Romans 3:25), took upon himself the wrath of God that they deserved (1 Peter 3:18), and thereby qualified them to be welcomed into God’s presence and kingdom (Colossians 1:12 – 13). As a miraculous illustration of this, when Jesus died, the curtain of the temple, which symbolized that God exiled humans from his presence, was torn in two from top to bottom (Matthew 27:51; Mark 15:38; Luke 23:45). Jesus had not just inaugurated the kingdom; he had also won forgiveness for the sin that separated people from God.

In each proclamation of the gospel, the message is clear: through the death and resurrection of Jesus the Messiah-King, there is righteousness, forgiveness of sin, and the inheritance of God’s kingdom for any sinner who will repent and trust in him.

Drawn from articles in the NIV Biblical Theology Bible. 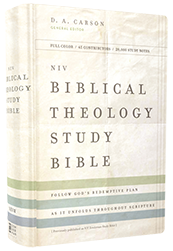 Previously published as the NIV Zondervan Study Bible, the NIV Biblical Theology Study Bible has been renamed to reflect what this Bible does best—trace God’s redemptive plan as it unfolds throughout Scripture. The new edition also features a much-improved reading experience with the NIV Comfort Print typeface. Learn More