Noah was awakened not by crowing roosters, but by the squawking of those pesky peacocks. He fed the foul fowl, if for no other reason than to shut them up. Then he spent a good 20 minutes shoveling out the elephant and rhino stalls. Lord knows if it weren’t for the vast ﬂood outside the ark, he’d never be able to tolerate the vile smell inside. He stared out one of the ark’s windows. Same view as the day before—water in every direction, all the way to the horizon.

After the 40-day flood, he and his family had been floating for months in their maritime zoo. They’d battled claustrophobia, seasickness, and stir-craziness.

Suddenly, the giant boat scraped to a stop. Noah thought to himself, “Solid ground? The waters must be receding!”

Noah waited a few days and then released a dove, but “the dove could find nowhere to perch” (Genesis 8:9) and returned. A week later, he tried again. “When the dove returned to him in the evening, there in its beak was a freshly plucked olive leaf! Then Noah knew that the water had receded from the earth” (Genesis 8:11).

That little olive sprig was far more than foliage. It represented hope. It was proof to Noah that God was working and that His purposes would come to pass. Noah’s olive leaf reminds us that the world’s floodwaters do eventually subside.

What are the floodwaters surrounding you today? Loneliness? Depression? A limping marriage? Wayward children? Maybe you stare at your bleak horizon and feel like you are destined to float forever in an endless sea of medical, financial, or occupational trouble.

Ask God for an olive leaf. It likely won’t be an immediate solution to your situation—it wasn’t for Noah; he still had plenty of days ahead on the ark (see Genesis 8:12–14). However, it will bring immediate encouragement.

Olive leaves can come in all sizes and forms: timely phone calls from friends, reassuring Bible promises, encouraging news, unexpected shifts in circumstances. And telling others about how you received an olive leaf often serves as an olive leaf for them! 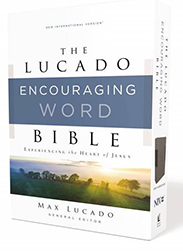