The Gospel’s Hope for Racial Unity 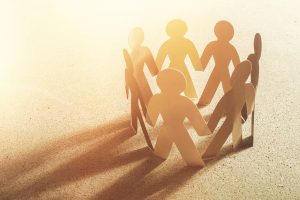 Although racial conflict and prejudice have dominated some news coverage lately, it is not a new problem. U.S. history offers many examples, of which the most conspicuous are the enslavement of Africans and genocide against Native Americans. Within living memory, apartheid existed in South Africa, six million Jews died in the Nazi Holocaust, and ethnic cleansing has cost millions of lives in locations as diverse as Rwanda, Sudan, and Bosnia.

What hope does the Bible offer in the face of such evil? Scripture voices many calls to work for justice. It also offers an alternative model of hope for the world through the church. Granted, the church itself has often struggled to rise above the divisions of its own culture; Christians have sometimes abused Scripture to reinforce prejudices inherited from their surrounding societies. At the same time, history also provides graphic examples of devoted followers of Christ who combatted such prejudices in costly ways. The abolitionist movement, for example, offers devout Christian models such as William Wilberforce, Harriet Tubman and many others.

Racial Reconciliation in the New Testament

But models go much further back. Abraham was to be a blessing to many nations; God used Joseph to save lives in Egypt and Canaan as well as his own family. In various ways, Ruth, Esther, and others in the Old Testament all provide examples of crossing cultural barriers. It is finally in the New Testament, however, that ethnic reconciliation takes center stage.

The Apostle Paul lived in a world where ethnic prejudice often boiled under the surface. In his day the basis for conflict was not skin color but often less visible marks of ethnic difference. Certainly the church of Paul’s day did not reflect today’s sorts of divisions. On the most common understanding of the eunuch’s role in Acts 8:27-40, the first Gentile convert was a Black African. Nor do northern Europeans’ ancestors feature heavily in the New Testament; the Holy Land was in western Asia, and the gospel mission does not reach southern Europe until more than halfway through the book of Acts. Happily, the New Testament does include all ethnicities in its summary of their representatives before God’s throne: “After this I looked, and there before me was a great multitude that no one could count, from every nation, tribe, people and language, standing before the throne and before the Lamb …” (Revelation 7:9).

Paul was a prisoner in Caesarea before he wrote his letter, probably from Rome, to the churches in and around Ephesus. Within a few years after he sent his letter, Jews and Syrians began massacring each other in the streets of Caesarea. The Jewish historian Josephus, who lived at the time of these events, laments that in one hour twenty thousand Jews were killed. Ethnic strife was a part of life in Paul’s day.

When Paul wrote Ephesians, it was not his first effort to address ethnic conflict. Some passages in the New Testament address the Jewish-Samaritan divide (Luke 9:51-55; 10:29-37; 17:16; John 4:1-42) or other cultural gaps (Colossians 3:11; Revelation 5:9; 7:9). But the biggest ethnic division in the mid-first century church was the division between Jew and Gentile. It was only around the year 48 A.D. that most of the Jerusalem church agreed that Gentiles could become Christians without being circumcised; and even then some detractors remained.

Ephesus was the leading center in the Roman province of Asia in western Turkey. By the time that Paul writes Ephesians, he has become a prisoner of Rome. Paul’s audience for this letter would know very well why he was in Roman custody, not least because people from Ephesus were involved in his arrest in Jerusalem. When Paul earlier traveled to Jerusalem for the feast of Pentecost, he brought representatives from various churches. One of these representatives was a gentile Ephesian Christian named Trophimus (Acts 21:29). Some Jewish opponents of Paul from Ephesus showed up in Jerusalem for the same festival.

These Ephesian Jews were angry with Paul because he had split their synagogue (Acts 19:8-9). Even more, his preaching of the one true God had caused them trouble in their community (Acts 19:33-34). Now in Jerusalem for the festival of Pentecost, they see him there with Trophimus, whom they recognize from their city. Later they also see Paul in the temple, and they wrongly assume that Paul has taken this Gentile into the holy temple with him. Consequently, they stir a riot against Paul, accusing him of having desecrated the temple (Acts 21:27-29).

In the Old Testament, the temple was divided only into the holiest place, the priestly sanctuary, and the outer court. Gentiles were welcome alongside Israelites in the outer court (1 Kings 8:41-43). But by the first century, purity regulations subdivided this outer court. Now outside the priestly sanctuary was the court of Israel, exclusively for Jewish men. Outside this court, on a lower level, was a court for Jewish women. And finally, outside this court lay the new outer court, beyond which Gentiles could not pass. In fact, signs posted at the entrances to the court of women warned, “Any Gentile who goes beyond this point will be responsible for their own death!”

The accusation that Paul has desecrated the temple thus stirs a riot. Nevertheless, Paul manages to quiet the crowd and preach to them about Jesus. Paul preaches in the local Judean language (Acts 21:40; 22:2), so the crowd will understand that Paul is one of them. Judeans listen attentively (Acts 22:2-20); meanwhile, Paul’s Jewish accusers from Ephesus, who probably spoke only Greek, cannot interrupt him.

Since Paul is preaching about Jesus, you might expect that thousands would be converted just like when Peter preached in the temple on an earlier Pentecost (Acts 2:41). But while many Jerusalemites could be respectful about Jesus, most of them did not like Gentiles. Roman governors had been exploiting their province, and resentment had been building, especially over the past decade and a half. So when Paul declares that Jesus sent him to the Gentiles (Acts 22:21), the riot starts up again (Acts 22:22).

We are God’s Temple

What does all this have to do with Ephesians? Remember, the Christians in Ephesus would know why Paul is writing to them from Roman custody. One of their own leading members was in Jerusalem with Paul during the week that Paul was arrested. Paul’s accusers were also from the same province as Ephesus.

Thus for them, and for Paul, there could be no greater symbol of this impassible barrier between Jew and Gentile than this dividing wall in the temple. And yet Paul boldly declares that this dividing wall has been shattered by Jesus Christ: “For he himself is our peace, who has made the two groups one and has destroyed the barrier, the dividing wall of hostility” (Ephesians 2:14). In his one body, he reconciled Jew and Gentile together “to God through the cross, by which he put to death their hostility” (Ephesians 2:16).

In reconciling Jew and Gentile in Christ, God was shattering a barrier that he himself once established in history. If God transcended this barrier in Christ, how much more does he summon us in Christ to surmount every barrier erected merely by human convention or, worse yet, human sinfulness?

Transcending division does not mean that we no longer have differences. Paul declares that “There is neither Jew nor Gentile, neither slave nor free, nor is there male and female, for you are all one in Christ Jesus” (Galatians 3:28). Yet Jewish and Gentile believers in Jesus still had cultural differences. Male and female (Galatians 3:28) still had physiological ones. But these differences no longer divide us; indeed, Paul invites us to respect the differences and accept one another (Romans 14:1—15:7).

In Paul’s day, some Jews, such as those who wrote the Dead Sea Scrolls, expected a new, end-time temple where no Gentiles would be welcome. But after Paul declares that Christ has shattered the dividing wall, he goes on to speak of a different sort of new temple. Not only does this new temple welcome both Jew and Gentile; it is composed of both Jew and Gentile: “Consequently, you are no longer foreigners and strangers, but fellow citizens with God’s people and also members of his household, built on the foundation of the apostles and prophets, with Christ Jesus himself as the chief cornerstone. In him the whole building is joined together and rises to become a holy temple in the Lord. And in him you too are being built together to become a dwelling in which God lives by his Spirit” (Ephesians 2:19-22).

Jesus and the New Temple

Jesus may have also indirectly challenged the segregation of Gentiles from the court of Israel. When Jesus cleansed the temple, he echoed two Old Testament passages in Mark 11:17: “Is it not written: ‘My house will be called a house of prayer for all nations’? But you have made it ‘a den of robbers.’”

The first passage, from Isaiah 56:7, underlined God’s purpose for the temple: God ultimately intended it for all peoples. In context, the second passage, Jeremiah 7:11, pronounced judgment against a temple that God’s people had distorted from its original purpose. Together, these verses may suggest that one part of Jesus’s action in the temple was to declare judgment against a religious institution that failed to function as an international house of prayer. Like Paul, Jesus confronted a segregated religious institution.

Cross-cultural love and commitment is worth suffering and dying for. Jesus and Paul showed the way.

Craig Keener (PhD, Duke University) is F. M. and Ada Thompson Professor of Biblical Studies at Asbury Theological Seminary and is the current president of the Evangelical Theological Society. He is author of thirty-two books, with more than one million copies in circulation, and is the New Testament editor for the NIV Cultural Backgrounds Study Bible. His wife, Dr. Médine Moussounga Keener, is from Central Africa. View his website.