Light in the Darkness: Sharing the Good News Spending time in the Bible, whether through reading, studying alone or in a group, memorizing, or meditating is absolutely essential for growing in our understanding of who God is, what he has done for us in Jesus Christ, and what it means to be those who are being conformed to the image of Jesus (Romans 8:29). And spending this time with God is necessary before any effective person-to-person evangelism can take place. I mean, how can we talk to others about God and what he has done if we don’t know these things ourselves? When we do come to know these things, we’ll naturally have a desire to tell other people about them, because how could we keep such good news to ourselves?

To help us engage in conversation with other people about spiritual truths in a way they can hear, we need to use a Bible translation that doesn’t present further obstacles to understanding by communicating those truths in a style of English that is unfamiliar to them (sometimes called “biblish”). Out of a desire to avoid this stumbling block to effective evangelism is how the NIV came to be.

Back in 1955, Howard Long, a traveling businessman and strong Christian, was talking with a fellow lodger at the Multnomah Hotel in Portland, Oregon. As Howard usually did, he wove the gospel message into their conversation, quoting some biblical passages as he did so. He used the KJV because that was the only English translation available to him. When the man he was talking with heard the strange words in a kind of English he had never heard before, he exploded into laughter! He concluded that the gospel message was just as outdated as the language used to communicate it.

A discouraged Howard returned home after his business trip and complained to his pastor: “We’ve translated the Bible into hundreds, a couple thousand tongues; when we run out of tongues to translate it into, someday we’re going to translate it into English!” Howard’s pastor was sympathetic. Together they brought the idea to church leadership and a process began that included assemblies, councils, study committees, and finally an ecumenical group of evangelical scholars who committed themselves to the production of an accurate Bible translation in contemporary English language. The NIV finally appeared in both the Old Testament and New Testament in 1978. Thanks to Howard Long’s concern for evangelism, the NIV was born. And it has been regularly updated ever since to make sure it continues to reflect the most up-to-date scholarship and that it communicates in the English language people actually use—a little different from the situation when I became a believer.

I was in the US Navy, stationed aboard a ballistic missile submarine. We would go on 10-week patrols in the North Atlantic without surfacing a single time. I was not a follower of Jesus Christ, and being separated from everything that I thought gave me security and significance led me to question what was really important in life. Why was I doing what I was doing? What was the point of life?

At that critical moment one of my crewmates offered to anyone who was interested a little pocket edition of the New Testament and Psalms. Someone had given it to him in port before we had set sail and he didn’t want it. But I did. Maybe I could find some answers by reading it. And I was amazed at what I found written there! God loved his rebellious human creations so much that he had provided his own Son to pay for our sins. And he had sent his Spirit to guide us into this new life he had made available through faith in Jesus. Here was the meaning, purpose, and direction in life that I had been looking for. Why hadn’t anyone told me about this before?! Anyway, I read that little pocket KJV several times that patrol and began my new life in Christ because of it. But it wasn’t all that easy to understand.

When we finally returned to port, I did something I had never done before: I ventured into a Christian bookstore. There I found and purchased a brand new translation of the Bible into contemporary English, the NIV. This is the Bible that helped a new believer like me better understand the gospel message and its implications. And it helped me share those insights with my crewmates in a more natural way. One time in port, for example, I was leaning on the rail of the submarine on a clear summer night, looking out over the inky black water with the stars reflecting on its rippled surface when one of the crew joined me there and said: “When you see how beautiful creation can be, it almost makes a person believe there is a God.” Providentially, I had been reading through the book of Romans in the NIV and I remembered words from the opening chapter. So I told him, “You know, the Bible talks about that very thing. It says, ‘Since the creation of the world God’s invisible qualities—his eternal power and divine nature—have been clearly seen, being understood from what has been made, so that people are without excuse’” (Romans 1:20). This led to a great conversation that eventually resulted in my friend becoming a brother in Christ.

God used one person’s faithful act of giving a New Testament to a sailor in port to lead me to faith in Jesus. Not only was my life changed forever, but that act also led to my ordination and 23 years of teaching at a seminary. So that person’s efforts have indirectly influenced my friend on the submarine, students, parishioners, and who knows how many others. Our efforts at evangelism don’t have to be huge things. They can be as small as giving away a New Testament. But God can do wonderful things with them.

After one of our 10-week patrols on the submarine, we were finally returning to port when I was invited to join the officer of the deck and the lookout up in the sail. The sail is the part of the submarine that sticks up above the rest of the boat. It has a hatch in it that can be opened when the sub is surfaced that enables a few people to stand on a small platform exposed to the elements. After being cooped up for such a long time in such a small space, it is quite a privilege to be invited to join that small group and experience fresh air and limitless views. So I was excited to get up there. But when I did, it was less than I expected. It was dark out and overcast, so there was no moon or star light. We had our running lights off and we were still far enough away from land so that there were no city lights on the horizon. There was nothing but darkness all around. I couldn’t see anything. Then I looked down at the submarine below and saw all kinds of tiny lights sparkling in the bow wave being created as we moved along. I had no idea what could be creating these lights, so I asked the other guys there with me. They told me that I was seeing the bioluminescence of tiny sea creatures. These creatures were emitting a tiny bit of light when they were disturbed as the submarine went by. They did this during the day as well when the sunlight was so bright they couldn’t be seen. But when there was nothing but darkness all around, those tiny lights given off by those little sea creatures could be clearly seen. It reminded me of the apostle Paul’s encouragement to the Philippians to “shine … like stars in the sky as you hold firmly to the word of life” (Philippians 2:15–16). We might not think we have very much light to give, but in the darkness all around us the light we offer may “shine like stars” when it is the only light that people are able to see.

The NIV and its sister translation, the New International Readers Version (which renders the NIV at a third-grade reading level), help us communicate the word of life to other people in language they can understand. They help us show them the light they don’t know in the darkness they know too well. Whether we talk to someone about the good news while we’re on a business trip, give away a little New Testament to someone like me, speak to a friend who provides an opening in a casual conversation, or engage with people in the multitude of moments that constitute our lives, God can and will use our efforts to accomplish his purpose of redeeming his people. As God himself says through his prophet Isaiah:

As the rain and the snow
come down from heaven,
and do not return to it
without watering the earth
and making it bud and flourish,
so that it yields seed for the sower and bread for the eater,
so is my word that goes out from my mouth:
It will not return to me empty,
but will accomplish what I desire
and achieve the purpose for which I sent it. (Isaiah 55:10–11) 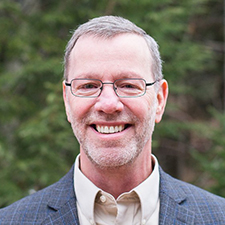 Michael Williams (PhD, University of Pennsylvania) is a retired Senior Professor of Old Testament at Calvin Theological Seminary, where he taught for 23 years. He has been a member of the NIV Committee on Bible Translation since 2005, a member of the NIrV review team since 2011, and an associate editor of the NIV Study Bible since 2016. He is the author of many articles and books on the Old Testament, including How to Read the Bible through the Jesus Lens (Zondervan, 2012) and The Biblical Hebrew Companion for Bible Software Users (Zondervan, 2015). His passion is to equip believers with knowledge of the Old Testament and its languages so that they may grow in their comprehension and appreciation of redemptive history and be adequately prepared to promote and defend the faith through word and action. Michael resides in Grand Rapids, MI, with his wife, Dawn.

Feeling inspired to give away the Bible? ChurchSource is a good source for low-priced NIV and NIrV Bibles. These include New Testaments and economy outreach Bibles.
Sign-up to receive new articles each week by email >