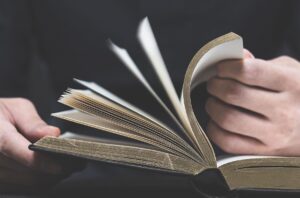 The Bible isn’t a single book. It’s a collection of many books that were written, preserved and gathered together so that they could be shared with new generations of readers. Reading, of course, is not an end in itself. Especially in the case of the Bible, reading is a means of entering into the story. Overall, the Bible is an invitation to the reader first to view the world in a new way, and then to become an agent of the world’s renewal. Reading is a step in this journey.

Those who wrote the books of the Bible chose to put them in particular forms, using the literary conventions appropriate to those forms. Many different kinds of writing are found in the Bible: poetry, narrative, wisdom collections, letters, law codes, apocalyptic visions and more. All of these forms must be read as the literature they really are, or else misunderstanding and distortion of meaning are bound to follow.

Take for example, the books of Samuel–Kings and Chronicles–Ezra–Nehemiah. The first tells a covenant history, how the kings who led Israel kept violating the covenant God made with his people. This helped the Jews in exile in Babylon understand why they were in exile. The second tells a royal history, how certain kings took care of the temple and the worship of God before the people were sent into exile. This account barely mentions the evil kings, but it still faithfully and completely tells the story of Israel for its purpose: it encouraged the exiles that they would return to their land and a king would rule them again. So taking whole accounts such as Kings and Chronicles and merging them into chronological order would destroy the specific narrative they are trying to tell.

On the other hand, there are full books in the Bible that would make sense to rearrange into chronological order. Take Paul’s letters, for instance. In the current traditional order, they are in order from longest to shortest. They are badly out of historical order, and this makes it difficult to read them with an appreciation for where they fit in the course of his life or how they express the development of his thought.

The Prophets are also placed generally in order of length. But it was not always this way. In ancient times, the keeper of the scrolls in a synagogue would place the “books” of the Bible in cubbyholes in a case. He kept them in the order he was taught or the one he chose. For many centuries, there was no fixed order of scrolls among the synagogues or churches around the world. Even when the codex (an early type of book) was created, the books in the Bible were not in a particular order.

The traditional order of the biblical books can also encourage misunderstandings of what kind of writing a particular work is. For example, the book of James has strong affinities with other biblical books in the wisdom tradition. But it’s typically placed within a group of letters, suggesting that it, too, should be read as a letter.

For some time now, the Bible has been printed in a format that hides its literary forms under a mask of numbers. These break the text into bits and sections that the authors never intended. The present system of chapter divisions was devised in the thirteenth century, and our present verse divisions weren’t added until the sixteenth.

Chapters and verses have imposed a foreign structure on the Bible and made it more difficult to read with understanding. Chapter divisions typically don’t correspond with the actual divisions of thought. They require readers to make sense of only part of a longer discussion as if it were complete in itself, or else to try to combine two separate discussions into one coherent whole. Moreover, because the Bible’s chapters are all roughly the same length, they can at best only indicate sections of a certain size. This hides the existence of both larger and smaller units of thought within biblical books.

When verses are treated as intentional units (as their numbering suggests they should be), they encourage the Bible to be read as a giant reference book, perhaps as a collection of rules or as a series of propositions. Also, when “Bible verses” are treated as independent and free-standing statements, they can be taken selectively out of context and arranged in such a way as to suggest that the Bible supports beliefs and positions that it really doesn’t.

The Order of the Books Is Not Sacred.

For a while, the biblical books were printed in several different orders. Gradually, the order we know today became more and more common until virtually all editions used that specific order.

Some Bibles have been produced that keep the books that were intended to be whole books as whole books, but they put those whole books in an order that is more helpful. One example is the NIV Sola Scriptura Bible Project. To help readers overcome the aforementioned difficulties, the editors of this Bible sought to order the books so that their literary types, their circumstances of composition, and the theological traditions they reflect are more evident.

• Chapter and verse numbers have been removed from the text
• The books are presented instead according to the internal divisions believed to be what their authors have indicated
• A single-column setting is used to present the text more clearly and naturally, and to avoid disrupting the intended line breaks in poetry
• Footnotes, section headings and any other additional materials have been removed from the pages of the sacred text
• Individual books that later tradition divided into two or more parts are put back together again
• The books have been placed in an order that we hope will help readers understand them better

Many readers will gain a deeper appreciation for, and a greater understanding of, the sacred texts using an edition like this which frees the reader from some of the inherent obstacles in our current commonly used format.

This article was compiled from the article, “Why is the Bible Not in Chronological Order” by John Dunham at Biblica and the Preface of the Sola Scriptura Bible Project.

Read the Bible in its original form, without notes, verses or chapter numbers. The NIV Sola Scriptura Bible Project shares that vision and invites you back to read the living Word in its most ancient arrangement. Learn More