Who Was the Angel Gabriel? 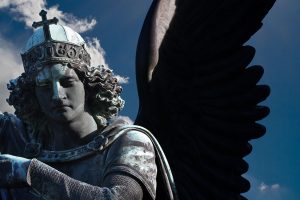 Few creatures are as misunderstood as angels. According to the Bible, these heavenly messengers are supernatural beings—not human beings who have “earned” wings in the next life by being good in this one. Also in the Bible, when people encounter an angel, they don’t say “Aww,” like we do when we see the artist Raphael’s chubby baby cherubs. On the contrary, angel seers are filled with awe. They fall to the ground and reach for the nearest defibrillator.

Gabriel is one of only two angels whose names are mentioned in Scripture (the other is Michael). Whatever epic assignments Gabriel had previously undertaken for the Lord, this one surely topped them all. He was sent “to Nazareth, a town in Galilee, to a virgin pledged to be married to a man named Joseph, a descendant of David. The virgin’s name was Mary” (Luke 1:26–27).

Only heaven knows how long Gabriel hovered unseen above the girl before he made his presence known. Mary was so . . . young! She didn’t seem old enough to have a child, much less this child. Nevertheless, Gabriel gulped and delivered his message: “You will conceive and give birth to a son, and you are to call him Jesus” (Luke 1:31). A few weeks later Gabriel would visit Mary’s shocked fiancé Joseph and explain the reason for this particular name: “because he will save his people from their sins” (Matthew 1:21)

Gabriel answered a few of Mary’s questions, then added, “For no word from God will ever fail” (Luke 1:37). Later, perhaps he wondered if he had said this as much for himself as for Mary.

For some reason, I picture Gabriel puzzling at the meaning of such mysteries. I see him winging his way back to heaven, pondering a thousand inscrutable questions: The Eternal One entering into time? The Almighty becoming a helpless, tiny baby in the womb of an unmarried girl? Deity in diapers? The One who built the universe from scratch becoming the adopted son of a common carpenter? Why not break into history in a more spectacular way? I see Gabriel shaking, or even scratching, his big golden angel head.

Maybe it didn’t work that way. Maybe God’s heavenly servants aren’t given to such musings. But we earthly servants should be.

Are we? Are we still staggered into speechless wonder by the story of God’s coming?